Fact: Groupers change from female to male as they grow larger .

Many divers recognise Groupers as being the large lipped fish which, quite frankly, look rather ugly. Their size helps them to be known on the reef but due to this they are an easy target for Spearfishers.

Groupers are usually highly territorial and can be aggressive to any intruders, towards other fish, its own species and human divers. However in some places in the world Groupers are hand fed by divers, this sometimes leads to aggression towards divers when they associate food with humans, as my mum had the pleasure of finding out in Turkey last year.

Whilst my mum was doing her deep dive to complete her Advanced Diver course she was wearing a 3mm wetsuit which had a bit of wear and tear, (It was a borrowed wetsuit and the diving season was almost over in Turkey). The dive site for mum’s deep dive was Camel Reef, a dive site renowned for  large hungry Groupers who were often hand fed by divers from other dive boats, before entering the water mum was a little on the nervous side, she didn’t like the sound of these Groupers.

A slow descent on the anchor line was made and once settled at the reef mum continued downwards to 30m to do a few tests to see if the nitrogen affected her body under pressure. Whilst doing a complicated maths multiplication on a dive slate a Grouper approached mum from behind.

Mum’s diving instructor, Fezz, saw the Grouper but realised mum hadn’t, he had a choice to let mum turn around by herself, be face to face with a large lipped fish and panic, or if he told her to turn around she would perhaps panic less. As mum ploughed through the equation the Dusky Grouper started chewing the loose threads on mum’s worn wetsuit. Fezz told mum about the fish, she turned around and came eye to eye with a huge fish snacking on her wetsuit, Fezz saved the day by pushing the large fish away with his fin the Grouper swam away and they continued the dive enjoying the fish from a distance.

Once topside again and back on the boat the story was shared, to this day my mum shivers when she hears the word ‘grouper’ and although a funny tale afterwards the Grouper could have been more aggressive and dangerous all because other divers had been feeding him.

A dive site isn’t a zoo, you shouldn’t be feeding, or touching aquatic life. We humans have bacteria on our body which is harmless to us but for marine animals this bacteria can be harmful. Human to animal interaction is a big ‘No No’ yet people continue to pick up starfish, or stroke groupers on their dive.

Last year in Turkey it was obvious people had been touching the groupers because there was fungi growth on the fish, this was a saddening sight, one diver had done this, they had enjoyed it yes, but they hadn’t thought about all the divers who came after him or even about the Grouper. 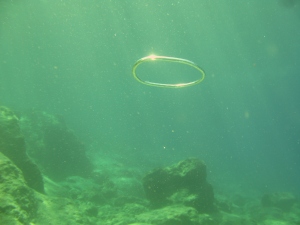 HOWEVER after revisiting Turkey this summer it was nice to be able to watch the groupers acting normally, they haven’t been fed by divers this year. We watched them from an appreciated distance, simply passers by in their world. Not a single one was aggressive, and that’s the way it should be.

Many divers recognise Groupers as being the large lipped fish which, quite frankly, look rather ugly. But personally every time a Grouper appears round the side of a rock my heart skips a beat, their size and the way in which they glide through the water is admirable, they aren’t a highly populated species of fish but you do see them a few times per dive, even after three weeks of solid diving this summer my amazement of their beauty was not extinguished. Groupers are definitely one of my favourite types of fish.

One response to “Grouper Epinephelinae”