‘Should something go wrong, he (the diver) cannot simply swim to the surface. A diver who has spent time in deep water must ascend gradually, stopping at predetermined intervals to allow his body to readjust to decreasing pressures. He must do so if he believes himself to be suffocating or chocking or dying. Panicked divers who bolt for “sunshine and seagulls” risk a case of decompression sickness, or the “bends”. Severe bends can permanently handicap, paralyze or kill a person.’ Robert Kurson, Shadow Divers

Hyperbaric medicine is the medical use of Oxygen at a level higher than atmospheric pressure. The recompression is performed to a predetermined schedule by trained personnel who monitor the patient and may adjust the schedule as required.

The nearest hyperbaric chamber to me is the Midlands Diving Chamber (MDC), situated next to St Cross Hospital in Rugby. On Monday 23rd December I went to the dive chamber with my family and a friend for a dry dive. I unfortunately was not able to take part however the rest of our group went for their last dive of 2013 and didn’t even have to sink into the freezing cold waters of Britain to do so!

We were welcomed into the MDC offices by Spike, and started by signing consent forms. Spike then gave an introduction about the chamber. We changed into scrubs and looking like proper doctors and nurses took some group pictures. The group of 7 (mum, dad, my sister, my brother, Ali, a lady called Annie and Spike) entered the chamber, I sat outside with Robbie controlling the chamber (I also wore scrubs… I didn’t want to miss out on an opportunity to wear scrubs! 🙂 ).

I was very anxious sitting on the outside of the chamber. I could see everything going on in the chamber because there were four cameras aiming at different points inside, I was all seeing and all powerful (or so it felt watching those screens) and no one inside could see me.

Once everyone was comfortable the dive started. After 1 minute the divers were at 3 metres, but they needed to come back up to 1.6m due to ear problems two members of the group were having equalising problems, it was my brother and sister. The fact that equalising problems had kicked in surprised me, although I knew it could happen I hadn’t thought that it would actually happen. 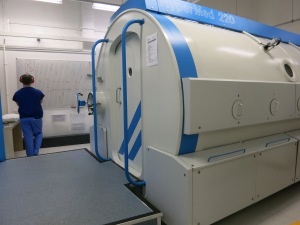 The divers went back down to 2.1m but had problems again so had to come back up. I wanted to help and offer some sort of advice, I could see it was difficult for my brother and sister to equalise. I didn’t want anyone to have to abandon the dive. They managed to get down to 4.4m and a slither of hope appeared; all looked ok until Spike did a big hand signal to stop and go back up. This time they went back to 1.7m.

All we could do was watch and hope for the best. After yo-yoing a bit Spike placed Amelia (my sister) and Mike (my brother) into a separate part of the chamber called the ‘entrance lock’, as the rest of the group gradually descended. My siblings were brought back to the surface and were able to leave the chamber. I went to open the door of the chamber for them and they climbed out both still in visible pain from the pressure exerted on their ears. They’d done their best and it was a real shame that they had to come back up so soon.

Top screen showing Amelia and Mike in the entrance lock. The screen below shows the other divers continuing their dive to 50m

We then watched with amusement as our parents, Ali, Annie and Spike descended down, down, down to the dark depths of 50m.

The narcotic effect was very funny. The first signs we saw of the nitrogen narcosis taking over was mum uncontrollably laughing. We didn’t see much of the games they played, apparently having to say the alphabet was easy but they couldn’t get any further than ‘m’. Also attempting to spell ‘Surfed’ with magnetic letters ended up as ‘Molfed’

Coming back to the surface was the long bit, the divers were put on Oxygen at certain points in order to get rid of the excess nitrogen in their tissues. A 1 min stop at 12 m on air, 6 mins at 9m on oxygen and 25 mins at 6m on oxygen. Time seemed to fly by talking with Robbie, taking pictures and watching as the controller of the chamber worked his magic on the participants inside.

A popped balloon, several imploded ping pong balls, a nose bleed and fifty nine minutes later the participants of our ‘experiment’ left the chamber with less nitrogen in their body than what they went in with. We changed out of our scrubs (sadly) and got ready to leave, a CD of pictures was given to us along with MDC water bottles, ‘Tanked Up’ magazines and leaflets.

Under pressure at 50 m, all these balls had been round at surface atmosphere

We left feeling extremely happy and much more enlightened about chamber treatments and the effects of nitrogen on the body under pressure.

If I was to ever get decompression sickness in the UK I would now feel more relaxed to go for treatment after having met the whole team and understanding how the chamber works. Many of the chambers in the UK are self-referral, you can pop in one day (maybe giving a little notice beforehand if possible) if you think you have a DCI you’ll do a Neurology test and then possibly start treatment, all without having to go through your nearest hospital, GP or a doctor.

Sneakily attempting to take a picture of them in action. Spotted by Spike! 🙂

If you think you have a DCI don’t hesitate to contact your nearest Hyperbaric chamber, remember every symptom you have after a dive is pressure related until proven otherwise. Don’t ignore the symptoms of decompression sickness because if you truly have a DCI it will only get worse, not better.

I’d like to say a huge thank you for everyone at the Midlands Dive Chamber, we had a great time and I’m sure it’s an experience none of us will forget. Extra thanks to Spike for taking great care of the divers and answering all my questions!

Robbie at the controls

If you want to find a hyperbaric chamber near(ish) to you click on the link below, I can’t promise it will have ALL the chambers in the world but it’ll give you a good idea as to what’s close to you; 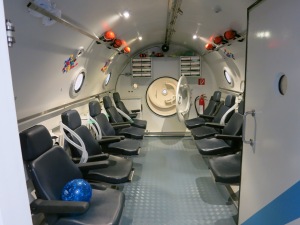